The Stockfisch sound engineers mixed the sound of seven microphones in an analog mixer to a stereo sum. They enjoyed this creative listening phase whilst doing this exciting down-mix. The musicians played two sets of four pieces - live, there were no edits or digital tricks involved.

We mixed the sound of seven microphones in an analog mixer to a stereo sum. We used exclusively the analog gear of the Stockfisch studios: e.g. the DRAWMER S3, the Avalon-EQs and the alpha compressor: (www.elysia.de).

The mix was then passed through the highest grade DSD 1-bit converter (DIRECT STREAM DIGITAL/2.8224 MHz). This DSD format remained as a pure 2-channel signal on our SACD workstation, as technically it cannot be manipulated, from which later the Direct-Cut-SACD Master was produced.

For the vinyl mastering process two stereo pairs of identical signals were needed. These signals must have a time offset of accurately half a turntable rotation. When cutting at 33 1/3 rpm this offset is exactly 0.909 sec. The signal arriving first will not be used for the cut, but serves as a control for the feed screw mechanism of the cutting stylus. Thus the required space for the groove is calculated for the signal that will run through the cutting stylus 0.9 seconds later.

To avoid using the normal PCM digital preview delay, we preferred instead to use the 1bit-data stream of our SACD mastering system for this vinyl. In our DSD workstation we configured the two stereo pairs on a 4track EDL with the exact time offset to obtain the preview and playback signals. This procedure was technically extravagant and possibly never been done before but thus we can guarantee that the Super-Audio-CD and the Vinyl were derived from exactly the same master. 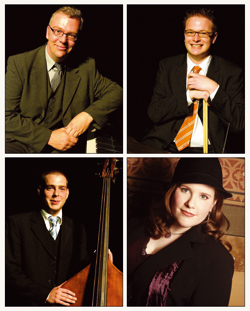 For this recording Thilo Wagner (piano), Jean-Philippe Wadle (upright bass) and Florian Hermann (drums) expand to a quartet with the addition of female jazz singer Barbara Bürkle from Stuttgart. 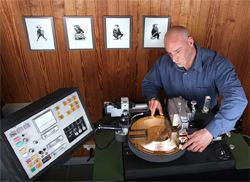